ber 2021 I was appointed by State Secretary Mona Keijzer as Chair for the Top Sector ChemistryNL (I think that was her last official act before she stepped down). I often got the question of what does a figurehead actually do? After my first hundred days, I resolved to write a blog about what a Chair does. However, the reality was more unruly. During the first 3 months I was mainly busy with understanding how the governance of the top sectors works. From the MTIB (Mission-driven Top Sectors and Innovation Policy), in addition to the Top Sectors that are sectorally organized, there are also the theme teams and the mission teams that run right through the Top Sectors. The first three months I was mainly meeting and working through an enormous amount of paper. That meant that after 100 days I couldn’t really write a nice story. At least not a complete story of what a Chair does. Now after a year I’m giving it a try, it won’t be complete, because that requires too much paper, but a year in a nutshell.

Chemistry is very broad, which is why we have made choices with the Top Team, where can we really make a difference. We opted for electrification (green hydrogen), biobased and circularity (especially circular plastics and CCU). If you make choices, you don’t make yourself popular, I noticed. It is also not the case that the other themes are no longer active, because as the Top Sector we will remain there for the entire chemistry, but our focus is on the three aforementioned matters. We also decided to align our international agenda with these themes. As a result, we will have a workshop on 19 October in Paris to exchange knowledge and experience and to make agreements about future cooperation with French companies. I am really looking forward to that, not least because it takes place in the official residence of the Dutch ambassador in France. The filming location of one of my favorite movies “Les Intouchables”. We have also identified focus countries on the other themes and are developing concrete partnerships. To be continued in 2023.

The Chairs play an important role in the growth fund proposals. In April, the growth fund proposal for circular plastics was approved. A huge opportunity for the chemical industry to really take things further on this theme. Together with my fellow Chairs, we designed the governance and appointed the board, and I am proud that we were able to achieve this quickly. I look forward to concrete follow-up projects. In this context I also visited Friesland. At Omrin I visited the Plastic Sorting Installation (KSI) and was impressed how the waste that we put in the wheelie bin is separated into many fractions (and I was even more impressed that 16 million people can use the organic waste from the wheelie bins). cubic meters of natural gas, on which their own waste vehicles drive, but what they have left over is returned to the natural gas network (Chapeau!). Then I visited Morsinkhof on the other side of the road, where HDPE bales are used to make granulate again, which can be used again in food applications. The visit ended at NTCP (National Test Center Circular Plastics). Here, companies can deliver their plastic waste and there it is determined on an industrial scale whether and how it can be separated into separate fractions. Wow, so much is happening already, that makes me positive for the future!

I was allowed to speak at various conferences and especially at the CPI conference and the COAST meeting I was pleasantly surprised by the many (young) women who were in the audience. Diversity is also an important theme in chemistry. When I was a guest at a roundtable meeting, the table host expressed how happy Ihe was that I was there, because there were so few women in chemistry. My answer that he was not well informed enough does not made him happy, but I am convinced that it is so.

Finally, I also had the opportunity to speak to many companies. I am impressed by the ambition and drive to shape the sustainable future. And we will participate in this from the top sector to make this possible. I also spoke to many startups and saw that they often struggled with the same themes. Together with the VNCI, we organized a round table for startups, the first meeting of which has now taken place. It was a great success and will definitely be continued.

My personal highlight in the past year was that I was allowed to open a lab with Ben Feringa in Groningen. It’s not every day that you stand next to a Nobel Prize winner! That was the first thing I said to him too. His answer was: ‘Girl, that was an eternity ago’. On the occasion of the opening, an acacia tree was planted in front of the lab. The acacia provides gum arabic, which Ben uses in much of his work. The tree was ready and we only had to cut the ribbon. Ben’s response: ‘It’s a shame we were not allowed to plant that tree ourselves, as a farmer’s son I was really looking forward to it’.

But the many presentations I was allowed to give and the conversations with the industry also left a deep impression. I can taste the energy and the will to face these enormous challenges. Let’s go for it!

I intend to regularly write a blog about the experiences of a Chair!

Read here the blog in Dutch 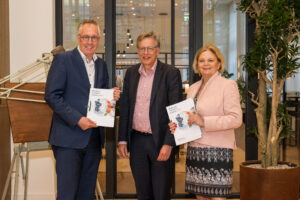 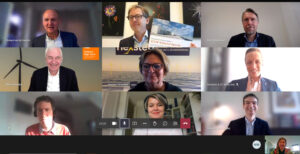 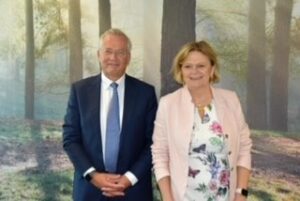 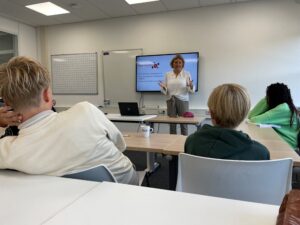 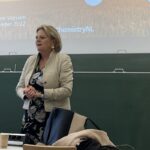 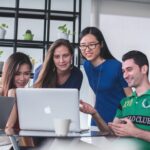 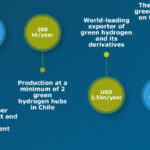 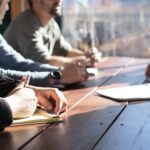